Considering Dutch water engineers being associated with flood prevention, a most remarkable event took place last week. In the southwest delta, where in 1953 the largest and most recent flood disaster took place, large excavators cut away a part of the embankment. With high tide, water from the Westerschelde now is able to flow into a tidal floodplain of 75ha. Omroep Zeeland published a short movie about this while also regional newspaper PZC had a report (link):

Cutting away 400m of embankments finds its roots in the construction of a tunnel underneath Westerschelde in 2003. The ferry connecting Zeeland’s Zuid-Beveland (island) with Zeeuws-Vlaanderen (in connection with Belgium) now disappeared, leaving the project area, known as Perkpolder, in a declining socio-economic state. In the mid-2000s it was proposed to start re-developing the area, partly influenced by the need to compensate damage to nature (the Westerschelde was to be dredged to allow large ships entry into the harbour of Antwerp).

In formal project documentation, the plan to de-polder the area is referred to as a ‘embankment relocation’. While in fact this is true (the primary embankment is relocated land inwards), the lowering and removal of the former embankment received a lot of criticism. Many people do so by stating that it is unnatural to de-polder areas and cut away dikes in a country located partly below sea level. Others state that, having the 1953 in mind, this goes against common sense and breaks a decade-old promise to protect Zeeland against floods. Nature organizations are blamed for pushing their agenda.

While this contested project is now reaching its closure, it is not the first, nor the last de-poldering project in the Dutch delta. A project which is now underway, the Noordwaard, concerns a polder measuring over 4000ha. It will partly be de-poldered and will transport water from the river Merwede, when it level reaches a certain height, through the polder towards the southwest delta. The restoration of polder floods and tidal dynamics in the region is likewise framed as improving ecological conditions of the surrounding Biesbosch wetlands. A paper can be downloaded via Water International, but for those without access may find the infographic interesting. 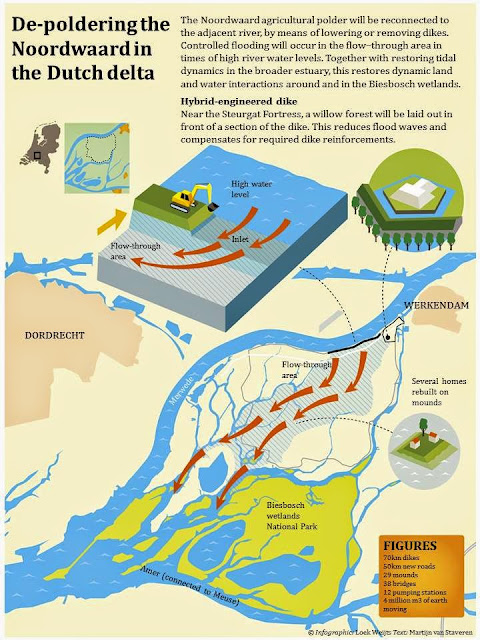 Other similar projects are on-going, for example in the Onderdijkse Waard near Kampen, where the embankments of the IJssel river are planned to be cut, and the Waterdunen project, also in Zeeland. Bring in the Dutch, bring in the floods?
Posted by Unknown at 16:51